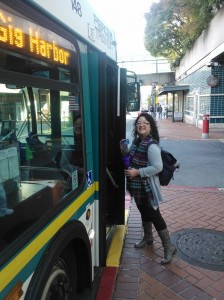 Downtown On the Go asked volunteers to Try the Bus for the month of October and let us know how the experience went. Here’s Mimi’s experience in two Blog Posts.

Nov. 10, 2012 – Riding the bus during Transit Month was a great experience!  I’m proud that I stuck to my guns and rode the bus nearly every Tuesday and Thursday (there was one week I rode the bus on a Friday instead because of work commitments).  I winded up making a “bus rider” friend who encourages (read: guilts – just kidding) me into taking the bus even when I don’t feel like it just so I can gab with her during the hour-long ride. I felt like a regular alternative options commuter, what with co-workers knowing my Tuesday/Thursday bus schedule and rushing me out the door so I won’t “miss the bus.” And, I feel appreciation for those who do this on a steadier basis (read: daily) because I know first-hand the commitment it takes to keep riding the bus.

Somewhat startling is the amount I calculated I save each time I took the bus to work – $9 – $10 (depending on gas prices)!  Since a complimentary ORCA card is a benefit I receive at work – I save not only on gas but also on toll charges (Narrows Bridge).

Also surprising was the weather was pleasant most of the times I took the bus – there was one time, though, towards the end of the month when the rain was relentless and I did resort to using an umbrella when waiting for the bus to take me back to my car at the Park and Ride.  It was a bit awkward trying to find a place for the dripping umbrella once on the bus, so I basically rested it next to my leg on the floor. I also happened to sit in a seat by a window which proceeded to leak profusely, dripping most unpleasantly, for the last 20 minutes of the ride – so it was a good thing I had my raincoat on in the bus. Other riders commiserated with me and made comments like, “Didn’t know you could get a shower while riding on the bus, did you?”  I informed the bus driver of the window leak and he remarked,“Yeah, we already knew this bus leaks – it is also one of the ones marked for retirement…” Poor bus.

I have used my ORCA card for trips into downtown Seattle from the Tacoma Dome Station on weekends – no parking issues, hurrah!  And really handy when transferring from one mode to another (e.g. King Count Metro buses, train, link).

Will I continue to ride the bus?  Yes, I will definitely try to because the savings are good, I have a “bus rider” friend to look forward to seeing and I know it is a doable, viable option.  However I will change the number of days per week I bus from two to one mainly because of family scheduling conflicts and something I did note previously that was slightly unsettling…the extra half-hour added on to the commute each way.  It’s not so bad on the way to work in the morning (although thinking about that extra half hour of sleep I could have had if I drove oftentimes makes my hand hesitate over the snooze button on the way to the shut alarm off button on the clock).  I still get a bit antsy on the ride home just because it seems an inordinately long length of time to me – I just need to chill more though is what I figure.

I have always encouraged friends and family to take the bus from the Tacoma Dome station to anywhere in downtown Seattle because of the atrocious parking issues there, and I will continue to do so – just now I have the “cred” of being a samurai warrior bus rider extraordinaire…okay, not so much.  I’m a fan of bus riding—I’ll just stick with that.

Oct. 10, 2012 – Week one started out as an eye-opener (and eye-closer…but more on that later).  I informed my supervisor I will be taking the bus two days a week and that I will be leaving work a bit earlier than usual and it was a go.

My apprehensions going in were…none.  Honestly.  Mostly because I had been a bus commuter in my past life AKA in my late teens/early twenties living in Seattle.  Also, I attribute some of my lack of apprehension to preparation.  I knew going in that I had to get up half an hour earlier thanks to research online (and using the handy-dandy “the bus stops here” Pierce Transit schedule booklet).  And, I packed a bus-ready backpack (with said booklet, sunglasses, mp3 player, earbuds, bottled water, umbrella and book).  What I don’t have (and therefore didn’t pack) is a smart phone so I couldn’t try the One Bus Away app but I could maybe opt for the text version if I’m ambitious, but at this point, I’m not.  My route is quite straightforward so I don’t really feel the need to use that particular tool.

My bus stop is at a Park and Ride.  It is clean with a shelter and two benches.  Since it is the first stop on the route, the bus was there when I arrived 10 minutes ahead of schedule so I was able to just hop on board.

I find my seat and take out my earbuds.  I find out they only work in one ear so after fruitless fiddling, I sigh and fold them back into the front pocket of my backpack. Thus, I fall back on Plan B, avid people watching.  I usually take my son, who is a SOTA student, with me when I drive into work downtown, so he was on the bus (in the back, away from me, where he pointedly chose to sit – the old “too-cool-to-be-seen-with-parents” dance – which I recognize and am amused…now).  I would say when the bus started to leave it was maybe a third full.

As the bus drives by and then turns into the next stop, another Park and Ride, I noticed a line of people under what I thought was a bus stop for a different bus (the bus I am on is an Express to Tacoma from Gig Harbor).  I thought, “wow, that bus will be full.”

When people started boarding, I quickly gain a seat-mate in a sweetly smiling young woman with a backpack…who immediately turns around and enthusiastically greets the young man sitting behind me and proceeds to talk incessantly, albeit quietly.  Okay.  But then people kept boarding and boarding, slowly as there are now people forced to stand and the line has backed to the front of the bus.  The driver has to encourage more movement towards the back as there are still people waiting to board (!)

Just when I thought no way we can possibly fit more people without some kind of “stacking” maneuver, the line ends, with the last person standing right next to the driver. So that line I thought was for a different bus was for this one.  Okay.

The thing I found interesting was while there was some grumbling, most people on the bus seemed like they were used to it and resigned; kind of reminded me of the footage you would see of the subways in Japan, where people were literally shoved in to the cars by subway workers and the subway goers expressions were either resigned or blank.  Plus, when I asked my son about this – about the mornings he did take the bus, he said it was always crowded. This tells me there should be more buses for this route, at least in the mornings.  Also, it is great that people are using transit!

While I won’t go into detail on my people watching, let’s just say I was kept entertained for the bus ride into downtown.

I did note that every stop up until mine (10th & Commerce) there were several people who got off, as opposed to just one person at one stop, a ton on the next, etc.

When I got off the bus and was walking to the office, I noticed that I felt a lot less stressed than when I would drive in most mornings.  A “bonus” I didn’t expect.  I suspect this probably has to do with the novelty…though on deeper introspection I have to admit most of it has to do with my stress level cursing at other drivers in the morning on Highway 16.  There, I’ve said it.

Moving on, the afternoon ride back was not as eventful (okay, I gave in and slept – thus the “eye-closing” part alluded to in the beginning).  But, when I got up 20 minutes later we were still downtown.  I did then start to stress…a little.

Since we arrived at my bus stop about 10 minutes later than the scheduled time, I didn’t feel as relaxed as in the morning; in fact I thought I felt more stressed than when I would drive home, having now racked up even more time to go home.  In exploring the “why” of that, I was surprised to find that I felt that way because I had this attitude that after work I just want to get to my destination as quickly as possible (home, my parents house, volunteer meetings, the store) and not want to be bothered with “delays.”  Even with my brief on-board naptime, this did not dispel that feeling.  The surprise came from not realizing I had that attitude.

The next day was a driving day for me and I would have to say when assessing my stress level overall with both experiences (driving vs. taking the bus), it all balances to about the same.  When taking the bus, less stress in the morning, more in the afternoon.

I find out the night before that I was driving my older son to the Park and Ride also (along with my SOTA student son) as he was staying a couple of days with friends in Seattle where he works.  Fine.

The morning of day two finds me waking my oldest son in plenty of time to get ready for the bus…I thought.  He went back to sleep.  Fast forward 25 minutes later and I am shaking him awake and telling him he has 10 minutes to get it together before we leave.

Ten minutes later, we are all up looking for his IPhone.  Ten minutes after that I am driving like a demon to the Park and Ride and alternately cursing, then begging, traffic lights and people to hurry, like they can hear me. My actions are pretty much frenetic movements by now, so convinced was I that we will miss the bus.

Things became a blur and then it happened.  I became THAT person.  You know the one.  Running alongside the bus, waving and gesturing frantically while clutching their stuff, hoping they don’t drop their keys that they stuffed who-knows-where in their haste to catch the bus.  THAT person.  The one who apologizes profusely while others (including wayward sons) are looking at you with mixed sympathy, accusation and relief…that they weren’t THAT person.   Thank goodness the driver was a kind one; I made us a grand total of a minute late.  But still.

The bus did fill up again, not to the gills as Tuesday, but still standing room only up to the front.  I commenced to do more fun people watching.

In the afternoon, I did not take a cat nap, opting instead to listen to a song or two then texting family and friends for the rest of the ride.  We were only three minutes late this time and even though I felt a tad bit antsy, it was not as stressful as Tuesday’s experience of getting up from a nap and realizing we stayed downtown.

It will be interesting to note as I stack up more experiences riding the bus what happens to my attitude with the commute after work.