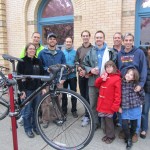 The employees at GeoEngineers take their jobs seriously. And they are serious about promoting cycling during May, which is nationally recognized as Bike to Work Month. But that doesn’t mean they aren’t having a lot of fun doing it.

Based in the Northwest, GeoEngineers is an earth science and technology company with 12 locations nationwide, including an office of 50 employees in Tacoma, Wash., that consists of geotechnical engineers, geologists, environmental scientists and engineers, hydrogeologists, hydrologists, river scientists, toxicologists, chemists and technology specialists. Their work may span the nation but their local work and activities keep them rooted and connected with the community.

One of the ways they attain this is through their commutes. GeoEngineers has been promoting Bike to Work Month for the past 5 years. This year, the company took it a step farther. In addition to promoting the Bike to Work Commuter Challenge, with teams in the Seattle, Tacoma, and Redmond offices, GeoEngineers is also sponsoring the popular Bike to a Better Tacoma event at the Hub on May 24, 2012. Bike to a Better Tacoma features valet bike parking, free pizza and an opportunity for cyclists to talk to the City of Tacoma about cycling matters – such as more bike lanes, designated bike corridors, and increased bike parking.

“We’ve seen a rising number of cyclists here at GeoEngineers and in downtown Tacoma. It all creates a great energy that is inspiring others to ride, too,” says Team Captain Bruce Stirling, who is also a board member at Downtown On the Go. He adds that “It helps our company, too. Employees are engaged in a friendly competition and are happier and healthier and, as a result, more productive. We tend to see fewer sick days and have a high retention rate of motivated, high-quality employees.”

To kick off bike month, GeoEngineers hosted a Bike Repair Day and BBQ outside their Tacoma office. The event helped spur excitement for Bike to Work Month and allowed employees with bike maintenance skills to help out those without such expertise. In addition, they made team bike jerseys and handed out water bottles to the participants. The Tacoma office team has a rivalry going with both Seattle and Redmond offices – and so far, Tacoma is taking the lead!

GeoEngineers’ support of an energetic workplace and healthy, sustainable commutes doesn’t stop outside of Bike to Work Month. The company subsidizes ORCA passes for all of the Puget Sound offices.  Because a majority of the employees live in Tacoma within a few miles of the office, riding a bike or taking bus are viable options for them. With incentives to ride the bus, company cars on hand for field work, available bike racks, and a company culture that is supportive of these commute methods, GeoEngineers makes a difference in Tacoma’s downtown community while supporting the health and wellness of its employees.