Downtown On the Go asked volunteers to Try the Bus for the month of October and let us know how the experience went. Here’s Carly’s experience from Week One to Week Four. 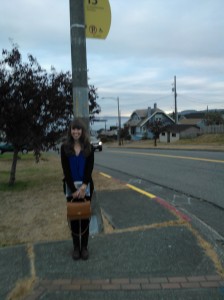 I studied abroad in France and rode the bus or some form of public transportation every day.  For six months.  I loved it.  So when I got on the number 13 here in Tacoma, I was definitely hit with a bit of nostalgia, which only made me excited for the next time I got to get on the bus!

In all honesty, I really didn’t have any apprehensions about riding the bus.  I have always wanted to challenge myself to ride public transportation into work during the summer months because I live on a bus line, and having to stand outside waiting for a bus on a beautiful summer morning didn’t sound half bad.  But, of course, that challenge never occurred.  I simply never took the time to look up the line or how it worked and getting myself ready a half an hour earlier to accommodate catching the bus just seemed “unrealistic”.

There are two bus stops on the same line that are within walking distance of my house.  There is one two blocks away, on a generally uneventful corner in Old Town.  It is not covered, but given its vicinity if bad weather is a factor, I could easily wait a bit longer at home for the bus and the hop on over to the stop, minimizing the time I spend standing out in the elements.  The other stop, perhaps 4-5 blocks away, is covered and smack dab in between two coffee shops.  Both seemed clean and have their own perks.

I did download the One Bus Away app, and used it.  It was easy to open it up when I was beginning to think about heading home to check when the next bus was scheduled to arrive.  It is helpful, and perhaps easier to navigate that the Pierce/Sound Transit websites, but it would obviously be infinitely improved if it showed the arrival of a bus in real time, particularly during the more nasty months weather-wise.  Additionally, though I have only used the bus so far to get to and from work (which is a very simple 10 minute ride on one bus), it could be useful to have a routing feature that maps out how I can get from point A to point B using transit.

My bus ride is rather quick, so I don’t really have the opportunity to work, read, or sleep.  I find that to be just fine.  The bus offers a few moments to simply sit before the work day begins.  It offers an opportunity for quiet and some people watching as well – although riders on my line are pretty normal including high school students, grandmothers, or professionals who work downtown.

My commute via bus was approximately 10 minutes, which is pretty darn close to the amount of time it takes me to drive.  Perhaps via bus is 3-5 minutes longer?  It’s certainly not a significant difference.

How much money did you save by taking the bus?
I didn’t actually calculate out any potential savings, but I definitely did notice that I was filling up my car less, even though I was still driving to Olympia once a week.  Commuting via bus is clearly a gas saver.  Also, thinking about it more – having a car at work facilitates lunchtime errands…regardless of whether or not those errands are necessary.  Not having a car downtown requires me to walk to the gym during my lunch and not run errands spending money on things I likely don’t need!

What was the weather like? What did you need to take with you because of weather?
October was ridiculously beautiful this year.  I did bring along a rain jacket or an umbrella once or twice.  But, in all honesty, my dedication wasn’t ever tested due to weather reasons because the weather was pretty consistently commuter-friendly.

What do you know now that you wish you knew before you started riding?
I wish I would have known how super easy it is.  Especially for my commute.  The bus picks me up and drops me off within two blocks of either destination.  Really, I don’t have a good excuse to not commute this way since I don’t need to switch lines or endure a lengthy ride.

What were you pleasantly surprised by?
I was surprised by how normal people on the bus were.  Although, I’m not sure what I was thinking considering I live in a pretty solidly middle to upper-middle-class neighborhood.  My co-riders were one of the following: a grandmother, a Stadium High School student, or a fellow downtown commuter.  I’m sure this cast of characters varies depending on the line, but people simply keep to themselves.

What were you UN-pleasantly surprised by?
I was a little surprised that busses come only once an hour.  I am not sure why I would have assumed a higher frequency of runs, but I suppose I thought they would run at least every half hour.  This is really one of the only drawbacks to transit in Tacoma.  I WISH busses came more frequently.  But of course, the demand must be there.  So it’s up to people like me to utilize the system in place in order to be able to make an argument for improvement.

Did you use your pass for anything other than work? What?
I often considered going from my place of work downtown, past my home bus-stop and up into Proctor to pick up some groceries.  But again, this plan was foiled since I would have had to spend at least an hour in the grocery store before the bus would come around again.  Also, this particular line ends around 6PM, meaning I wouldn’t actually have been able to jump on a bus for home.

Will you use the bus for work again? If not, why not?
Absolutely.  I enjoyed the short ride and the feeling of being able to do my part to help the environment and to also support Tacoma’s transit system.  And like I said, unless I have a meeting in Seattle or Olympia that I need to get to that day, there truly is not a good reason to not use it for commuter purposes.

Would you recommend the bus to a friend or co-worker?
Absolutely.  Already have!