Promoting Bike Safety on the Streets 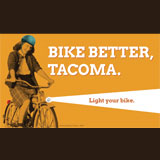 In the City of Tacoma wearing a helmet when bicycling is the law and in the State of Washington a front light and red rear reflector are required during hours of darkness.  The City of Tacoma is currently working a bicycle safety campaign to promote the use of helmets and bike lights by its residents.  The campaign uses historic photographs of Tacoma cyclists outfitted with safety equipment and encourages riders to Bike Better.  Ads will soon be seen on the sides of Pierce Transit buses and can be found on posters around town.  City staff have collaborated with Tacoma Police on the safety campaign and provided bicycle lights and postcards for them to hand out to cyclists riding in the dark rather than ticketing them.