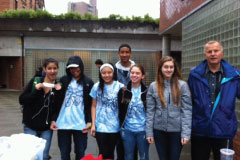 While city and transportation employees were planning events for Bike Month to encourage individuals to bike to work, high school students were doing the same on their own campuses.  Bike club participants at Stadium High School and SOTA held Bike to School events in May to encourage students to drop their car ride to and from school, and instead, ride their bike.  Each bike club held events throughout the month to encourage participation, with prizes like t-shirts, stickers, and bike gear as incentives.

The students at both schools had great participation, even through some rainy days.  Stadium High School had 20 – 22 students ride to school each day during their Bike to School Week, May 29 – June 1.  Students biked to school from North Tacoma, Central Tacoma, and even NE Tacoma.  Each time a student rode to school they received a stamp on their Bike to School Week punch card.  Each stamp represented a certain prize.  This was Stadium’s second year participating in bike to school week.

The newly formed bike club at SOTA had outstanding participation as well.  They promoted Bike to School Month, with 24 students participating throughout the month, biking a total of 1030 miles.  The students at SOTA held both individual and classroom competitions.  They had t-shirts and stickers for participants, and prizes for the top riders.

Downtown On the Go assisted in the development of both high school bike clubs, and continues to be a part of their meetings and programs.  “We are so impressed with what the students have done on their campuses to promote biking, and we look forward to working with the students next school year”, said Meagan Kula, Downtown On the Go Coordinator.