Morris to retire in December 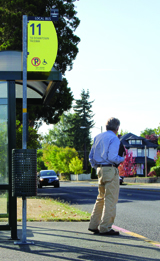 His leadership and innovation leave a legacy
At the end of December, one of Downtown On the Go’s founders and current board member Scott Morris retires after more than 31 years of service at Pierce Transit. Scott’s dedication to Pierce Transit and Downtown On the Go have been instrumental in making both organizations what they are.

In title, he’s the Director of Public Affairs at Pierce Transit. In practice, he’s a DOTG Board Member, former City Planning Commissioner and former Landmarks Commissioner. He is a bus and bike commuter, an enthusiastic advocate for sustainable transportation, and with his unassuming demeanor and sharp wit, Scott’s presence will be missed by all he works with. I sat down with Scott recently to talk about his career.

Scott moved to Tacoma with his wife, Amy, in 1976. With an MFA in print making, he began working as a graphic artist at a downtown Tacoma printing company, commuting by bus on Tacoma Transit. (Scott is pictured here at his original bus stop. The photo was taken as part of Pierce Transit’s Best Stops campaign this November.)

In 1979, voters were asked to form the Public Transit Benefit Area to expand transit throughout Pierce County using dedicated sales tax. Voters said yes and Pierce Transit was formed.  Scott was hired on a temporary contract to help create the new bus schedules. (Ironically, Scott had voted no.  Even though he was a bus commuter, he had done the math and it was going to cost him more than Tacoma’s 75¢/month household tax.  “It was an important lesson to me about taking positions,” Scott quipped.)

Pierce Transit
Scott was part of the original team tasked with naming the new agency. Then, as Pierce Transit designed new schedules and determined routes, he helped conduct many public meetings, asking everyone what they wanted their system to look like.

Scott has seen many changes to Pierce Transit over the years from the rapid growth of Pierce County in the 1980s requiring additional buses to the updates to Commerce Street in the 1990s, to the funding shortfalls of the 2000s. Scott says that the most significant change in his career was in 1999 after the passage I-695, Tim Eyman’s initiative to eliminate the Motor Vehicle Excise Tax. This essentially halved the money available to Pierce Transit. Luckily, Pierce Transit’s reserves were robust enough to keep the agency going but within two years they had to ask the voters to raise sales tax or cut their service.

When I asked about the bus book that includes all local routes, Scott said that it began as an element of an advertising campaign in 1987. Although it was called The Bus Stops Here, just as it is today, it was an 8 ½ x 11 piece and suggested “adventures on the bus”: things to see in Tacoma-Pierce County and how to get there. In 1988 the book became the practical, user-friendly ride guide that it is today.

Scott attributes his longevity at Pierce Transit to the fact that he has never lost sight of who he is serving. “Seventy-five percent of our customers have household incomes under $40,000,” he notes. That makes local transit issues more challenging than regional ones. “Many people really do rely on the bus for their jobs, doctor’s appointments and for their day-to-day lives at a very local level.”

“I’m proud that I started my career in Tacoma by taking the bus to work.  New commuters still need this option to get them to their first job.”

Downtown: On the Go!
Scott was part of the Downtown On the Go partnership from it’s inception but won’t accept praise for the organization’s success. He humbly credits the downtown businesses who stepped up and saw the need for a coordinated approach to downtown transportation. He notes that the involved businesses are sticking with it for the long-term.

“We compete with Seattle and Portland for jobs and businesses. Those cities’ enlightened policies are attracting growth. Downtown On the Go sends the message that downtown Tacoma also has this vision.”

Scott feels that the number of parking garages a city has is not the reason companies decide to move into a downtown environment. “Businesses that have invested in downtown Tacoma have done so because they are committed to the community and to society. The private companies involved in Downtown on the Go are investing in the potential of Tacoma, a future that cannot be achieved in a suburban setting.

From the beginning, Scott has been a part of the Downtown On the Go conversation, bringing together businesses to hear about their needs, creating new partnerships and thinking about creative ways to bring transportation options to people.

“Downtown On the Go is the best partnership I’ve ever been a part of,” says Scott. “There is more cooperation and a better understanding of common goals than most groups I’ve seen.”

What to expect going forward? Scott says that $4 gas prices “changed everything.” That’s when people start making choices other than their cars. “Now it looks it will take $5 gas to motivate commuters,” he says. With the pieces in place to give people options, Downtown On the Go is poised and ready for that inevitability.

In retirement, Scott may not be commuting regularly by bus but he says he’ll still ride his bike and advocate for transit and for the people who benefit from it. Scott leaves a legacy at Downtown On the Go and at Pierce Transit. Thank you, Scott, for all the years of hard work, dedication and innovation. You will be missed!