Downtown Transit Ridership is Up 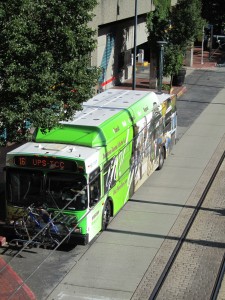 In addition to advocating for a reduction plan focused on efficiency and high ridership which maintained routes into downtown, Downtown On the Go did a significant amount of direct outreach to downtown businesses prior to the October reductions and conducted a series of “Try the Bus” events to help new riders learn how to ride the bus and ask questions.

“This just goes to show how effective programs like Downtown On the Go can be. When we focus time and efforts in dense, urban areas, we see results,” said Scott Morris, Pierce Transit’s Manager of Public Affairs and Downtown On the Go Board Member.

Compared to the third quarter of 2010, Sound Transit’s ridership also increased. Express Bus Service has increased by 9.2 percent and ridership on the Tacoma Link has increased 8.7 percent this year. Sound Transit attributes this to higher gas prices and an increased awareness of transit options. Their partnership with Downtown On the Go has helped Sound Transit to increase their reach in Tacoma and maintain a level of visibility.

Downtown On the Go will work to maintain this increase in ridership through programs and advocacy work in 2012. See our Transit page for information about riding transit to and from downtown Tacoma.