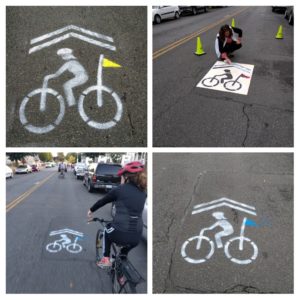 This fall, in collaboration with the City of Tacoma, we implemented two different pop-up bikeway improvements. In accordance with the Tacoma Mobility Master Plan and plans involved in the city’s Links to Opportunity Project, we drew out opportunities to enhance existing roadways in a cheap, light, and quick way.

On 6th Ave, between S I St. and S J St. we striped a bike lane and used green paint to add even more distinction. On S J St., between Earnst Saint Brazil and S 14th St., we created a bike boulevard. These improvements are temporary but they represent real changes that can and will be made to make Tacoma a safer place to bike.

Check out our additions and let us know what you think!

What is a bike lane?

Bicycle lanes are designated by a white stripe, a bicycle symbol, and signage that alerts all road users that a portion of the roadway is for exclusive use by bicyclists. Bike lanes enable bicyclists to travel at their preferred speed and facilitate predictable behavior and movements between bicyclists and motorists.

What makes a bike boulevard?

A bicycle boulevard is a type of bikeway composed of a low-speed street which has been made safer for bicycle traffic. This includes wayfinding signage, slower speeds, and other road slowing techniques. They often run parallel to arterial popular for cars.