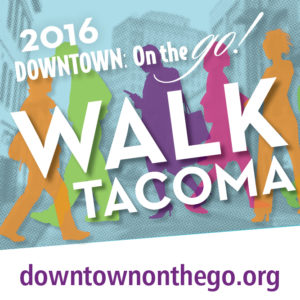 Learn about Tacoma’s rich theatre history on the Walk Tacoma Theatre Walk on Wednesday, May 4 at 5:15 p.m. sponsored by Spaceworks Tacoma.  This free walk, led by David Fischer, Broadway Center for the Performing Arts Executive Director, will take participants on a one-mile walk to many of Tacoma’s gems, like the Pantages, the Rialto, and the Grand Cinema.

The Walk Tacoma event will begin outside the Pantages Theater and end with a social of light appetizers at the Old Spaghetti Factory.  The route is a bit hilly, with a climb up the Spanish Steps and hill climb up to the Grand Cinema on Fawcett, but participants who are not up for the hill will have the option to meet up with the group as they head back down to the Rialto Theater and Theatre on the Square. The route is largely accessible for wheelchairs and strollers, with an alternate route at the Spanish Steps.

Walk leader David Fischer will share information about historic theaters, Theater District artwork, upcoming renovations, and a tour of the Pantages Theater.  There is no pre-registration necessary, just join Downtown On the Go at the start location.

The Walk Tacoma Series, sponsored by the Puyallup Watershed Initiative Active Transportation COI, is held on the first Wednesday of the month, from April through October. The fun, themed walks, now in their seventh year, encourage people to enjoy downtown on foot by introducing new walking routes, and sharing information about the community and its history through the guided tours.

About the 2016 Earn a T-shirt Program
Pick-up a Downtown On the Go punch card at the Theatre Walk and earn a DOTG t-shirt by attending three Downtown On the Go events. Punch cards will be available at all DOTG walk, bike and transit events.