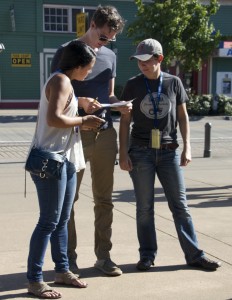 Participants will begin the scavenger hunt between 4:30 – 5:30 p.m. at the WA State History Museum Plaza at S 19th & Pacific Ave.  They will use public transportation and their feet to take them to destinations scattered across downtown Tacoma before meeting back at the plaza and heading to Anthem Coffee & Tea for food, drinks and prizes at 6:45 p.m.  The Downtown On the Go event, sponsored by Pierce Transit, is free and there is no need to pre-register.  All ages are welcome.

Participants may complete the hunt as individuals or in teams.  Many of the destinations on the hunt have been featured during the 2015 Walk Tacoma series or in the Walk Tacoma Downtown Walking Maps (available at the event).  Participants will be asked to take a photo at many of the locations, so a camera or camera phone is required.

Prizes will be awarded to participants reaching certain point levels, including loaded ORCA cards and local gift certificates.  The highest scoring individual and team will each win a grand prize.

Since this is the final Walk Tacoma event in the 2015 series, Downtown On the Go will also be rewarding participants who have participated in the Walk Around the World campaign, with a Walk Tacoma t-shirt.

Walk Tacoma 2015, sponsored by CHI Franciscan Health, is a nine-event walking series held on first and third Wednesdays, from April through August. The fun, themed walks, now in their sixth year, encourage people to enjoy downtown on foot by introducing new walking routes and sharing information about the community and its history through the guided tours. The walks are scheduled at the lunch hour and just after work to encourage downtown employees to walk during their workday, whether it is to and from work or at a lunch break.

For more information on the full Walk Tacoma Series, visit www.downtownonthego.org or find us on Facebook or Twitter.