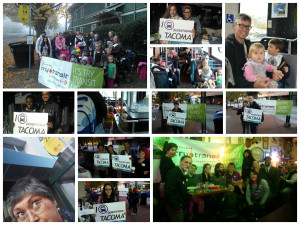 This October, area residents had a plethora of incentives to try taking transit, and whether first-timers or regular riders, they were rewarded for riding, thanks to promotions by Pierce Trips, Downtown On the Go, and Transportation Choices Coalition.

Riders in Pierce County who logged trips on the PierceTrips.com Commute Calendar had the chance to win a trip to Hawaii among other prizes as part of Wheel Options month campaign.  Though the number of participants is still being tallied, at press time almost 250 people logged over 3,300 trips in October!

Downtown On the Go also hosted events throughout the month to promote transit ridership, including a family-friendly Bus to the Zoo, an adults-only Bus Crawl around Tacoma, and tents with treats at the Commerce and Tacoma Dome Station transit centers to simply say “thanks” to those who take transit.

Locally-hosted events coincided with the regional Try Transit campaign put on by Transporation Choices Coalition.  Pierce County residents were among over 800 riders in the Puget Sound area who contributed to meeting 142% of the campaign’s goal of 10,000 trips on transit during the month-long challenge.  Those transit trips taken during October saved over 104,000 pounds of CO2, the equivalent of taking 100 cars off the road!

One last big thanks to all of you who tried and ride transit!