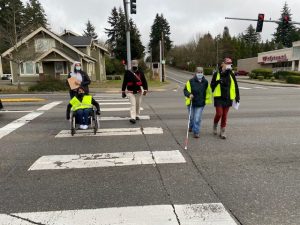 The Parkland community has seen rapid growth in the past several decades and has proven to be the fastest growing CDP in Pierce County. Many residents have made the broad case that while Parkland’s population continues to grow, the development of physical infrastructure supporting the community has lagged. One of the clearest examples of this lag in development of physical infrastructure are the neighborhood’s sidewalks. Many streets in Parkland lack any sidewalks at all.

In 2020, the Pierce Conservation District retained a consultant with expertise in the Parkland community to engage community members in a walkability study. The consultant, a lifelong Parkland resident, convened a working committee to begin developing the scope of the walkability project. Committee representation included staff from organizations like the Tacoma-Pierce County Health Department, Pierce County, Pierce Conservation District, and Downtown on the Go.  The working committee began efforts with a shared understanding of the need for additional sidewalk development in the community. Additionally, the committee was aware of near-future sidewalk development in the Parkland community through Pierce Transit’s Bus Rapid Transit (BRT) initiative.

The initial scope of the project was to produce a community informed ranked list of the streets most in need of sidewalk development in Parkland. This ranked list would be informed by responses to a community-wide survey. In the weeks of planning, the scope also grew to include two community walking audits. Work on the Parkland Walkability Assessment began in July 2020 and was completed by December 2020.