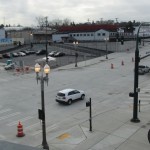 Commuters can now get from one end of downtown Tacoma to the other on Pacific Avenue, thanks to an earlier than expected opening of our main street in association with Sound Transit’s D-to-M Street Project. Vehicles, transit, bicycles and pedestrians all have access to the roadway, including safe crosswalks and new sidewalks.

Beginning Tuesday, March 20, 2012, A Street will be closed between 25th and 26th streets and will not reopen. This section will be re-graded and re-paved to serve as a pedestrian and bicycle underpass.

According to Sound Transit, work still to be completed includes:

We understand that the bridge will also undergo a paint job before it’s officially done. The final phase of construction for the project is anticipated to be completed, with trains running to South Tacoma and Lakewood, by fourth quarter 2012.