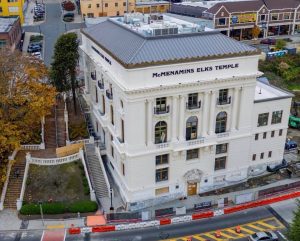 With all this growth and new development,there is much to consider. Asking where we are going to park is short sighted.  Let’s take a step back and not jump from growth and development to parking. We’ve missed a step. People.

With growth comes people. People often bring cars. But they don’t have to. Or least not all of them. If we support new development with policies and practices that create the thriving, vibrant city,  that welcomes new development, we can have growth without the Parking Apocalypse. It takes a walkable city. It takes a bike-friendly city. It takes great transit. And it’s here.

Admit it, Tacoma. We’ve been talking about growth and revitalization for longer than I’ve been here. And now we’ve got it. And we’re going to talk about…. parking? Let’s talk about the booming businesses, the increased tax base, the thriving restaurants, the people enjoying downtown after 5 p.m. and on the weekends.

When Tacomans walk, bike, and take transit they are healthier, they are helping the environment, they are saving themselves and the City money, and they’re freeing up parking spaces for those people who rely on driving along. To prioritize drivers it to exclude our most vulnerable community members.

A recent article in The News Tribune belabored the point that parking will be more difficult to find because of the new McMenamins development in downtown Tacoma. This may be true. But instead of criticizing this great new space for not fulfilling all our parking dreams, let’s take a moment to celebrate this new development for what it will do. With a light rail stop literally at its front door, and in the heart of a walkable city, the new McMenamin’s Elks building will bring tourists, add interesting new restaurants and bars, add to the number of hotel rooms available downtown, and add an amazing new music venue.

There are hundreds, if not thousands of cities around the country, and throughout the world that are making growth work without block upon block of parking. And economies are thriving.

In Boise, they’ve added a connected network of bike lanes and seen an increase in growth and a boom in their economy.

New York City has taken out parking and driving lanes and seen as much as an 80 percent increase in economic activity in some neighborhoods.

In Minneapolis, where they invested in light rail over parking, businesses have seen 10 to 18 percent growth along the line.

And in New Orleans, one of America’s most walkable cities where it’s easier to walk, bike, or take transit than to drive, people flock to the city for the night life.

The City of Tacoma has laid the groundwork to be one of these thriving cities as well. And this is part of why these developers are choosing our city. The city has developed codes and policies that say that the car doesn’t come first. They’ve invested in infrastructure around walking and bicycling.

Tacoma’s city code says that in downtown Tacoma, there are no parking requirements (minimums or maximums). And as developers know, if they don’t have to build parking, they can build other amenities for their tenants. If the market was demanding parking, they’d be building parking. But they know that they can save hundreds of thousands of dollars by not building as much — and the people will still come.

And what about transit? Pierce Transit has seen ridership increase by almost 4 percent from the first quarter 2017 to first quarter 2018. And while we need more late-night service and more frequency to really make the system viable, downtown Tacoma has the best transit in the county, and service has increased 16 percent since 2015, finally putting us in the range of pre-recession levels.

Developers like McMenamin’s and Koz Development are among the downtown developers that know these codes are not only development-friendly but market-friendly, too. McMenamin’s is working to get their employees to work without their cars, freeing up parking for visitors. Koz is providing amenities to their downtown renters so they don’t need a car.

It’s with these codes, the City’s investments supporting a walkable and bikable community, and Pierce Transit increasing transit service, that downtown Tacoma will thrive in the way we all envisioned: supporting growth that serves people, not cars.

We’ve fought for investments like McMenamins, and have planned for years for a growth in our population. Now let’s celebrate it.

Kristina Walker is the Executive Director of Downtown On the Go, Tacoma’s Transportation Management Association.