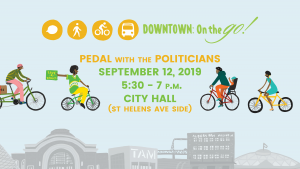 Posted on September 4, 2019 by dotgadmin

On Sept. 12, 2019, your Tacoma City Council Members and other local politicians are biking around Tacoma to get up close and personal with the existing (and missing) bike and trail network in downtown Tacoma. At our annual Pedal with the Politicians bike ride you can ride alongside your elected officials and City Council candidates as we look ahead to local elections and an update of the Transportation Master Plan.

Key points on this year’s ride will be:

The best way to advocate for bicycling in Tacoma is to get out and ride. And the best way to encourage our local government to better our roads for people on bikes is to ride alongside them on Sept 12!

Unsure of the best routes in downtown Tacoma? Contact us about our Bike Buddies Program and we can match people up with a cooperative comrade.