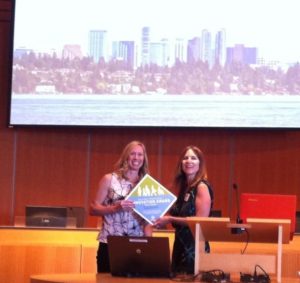 Feet First’s 2016 Walkable Washington Symposium and Awards recognized Walk Tacoma, one of Downtown On the Go’s signature event series on June 7, 2016. The annual walk series highlighting downtown Tacoma, was one of only three programs honored statewide. Events Manager Meagan Kula, who has led the Walk Tacoma program through incredible growth since 2012, was there to accept the award.

“This is a huge honor and a honor that the people of Tacoma should be proud of,” says Board President Mike Hutchinson. “The number of people that Downtown On the Go’s Walk Tacoma program brings to the streets every year is incredible. This program is doing so much for the vibrancy of downtown Tacoma.”

Walk Tacoma, which has inspired more than 6,000 people to get out and walk in its nearly seven years, was given the award for innovation and inspiration in the Advocacy & Encouragement category. More than 150 leaders, planners, engineers, educators, and advocates attended the Walkable Washington event in Bellevue, Wash., where three outstanding projects from across the state were awarded.

Walk Tacoma was also honored earlier this month by the Landmarks Preservation Commission with the award for Urban Revitalization at the 2016 Historic Preservation Awards.

In addition, Mayor Strickland honored Walk Tacoma again with a proclamation of Walk Tacoma Day (June 15) for the third year in a row at the Tacoma City Council meeting.